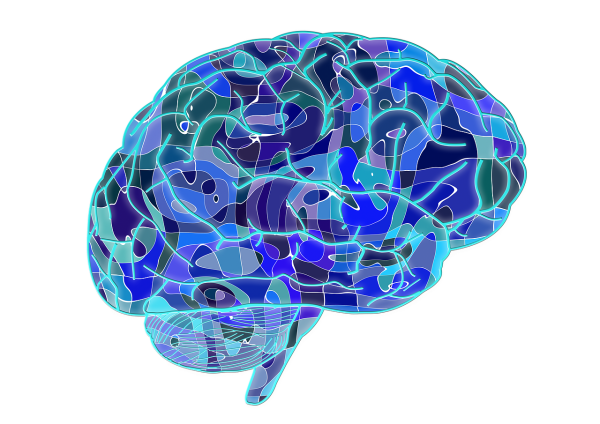 Vitamin B12 plays many important roles in the health of our brain and nervous system, and it’s important for parents to understand this essential nutrient. Since B12 is not manufactured by our bodies, we are required to get it from food. Foods with the highest levels of naturally occurring B12 include beef liver, meat, shellfish, fish, dairy, and eggs. In addition some processed foods and nutritional yeast are fortified with B12. Multivitamins are another potential source of B12.

This article will discuss 3 of the important roles that Vitamin B12 plays in our brain health, along with symptoms of Vitamin B12 deficiency. 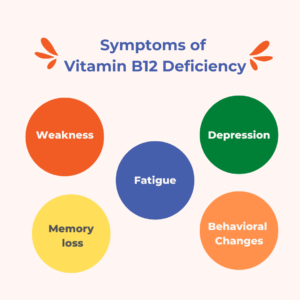 B12 is required as a cofactor in the pathways our bodies use to make neurotransmitters like serotonin and dopamine (among others). Balanced neurotransmitters are important for mood regulation, focus, and energy. Low serotonin activity is associated with depression and anxiety, which is why the most commonly prescribed antidepressant medications (SSRIs or Selective Serotonin Reuptake Inhibitors) work by prolonging the serotonin signal between nerve cells. Low dopamine levels are linked with difficulty concentrating and lack of motivation.

Red Blood Cells (RBCs) circulate throughout our body to carry oxygen to all of our cells so that our cells can make energy. Oxygen is carried on a protein called hemoglobin within the red blood cell. Iron is part of the hemoglobin molecule, which is why iron deficiency can lead to low levels of RBCs, also known as anemia. This type of anemia is termed iron-deficiency anemia.

Our bodies are constantly producing new RBCs in our bone marrow, and B12 is required for this production. The RBCs remain in circulation for approximately 4 months, at which time they are removed from circulation by special cells in our spleen, liver, or bone marrow. Since B12 is required to make new RBCs, B12 deficiency can also lead to a different type of anemia known as megaloblastic anemia where there are larger-than-normal RBCs that don’t work well and are present in smaller quantities than usual.

Since all of our cells, including our brain cells, rely on oxygen to produce energy, it’s easy to understand how low levels of RBCs (anemia) can contribute to fatigue, memory loss, concentration difficulties and depression. 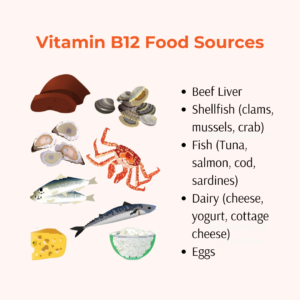 Homocysteine is an amino acid that is produced in our bodies, and high levels have long been linked to a variety of health issues including coronary artery disease, blood clots and strokes. More recent studies also show an association between high homocysteine levels and depression and anxiety in children1,2. Vitamin B12 plays a role in controlling healthy homocysteine levels by acting as a cofactor in the pathway that converts homocysteine into a different amino acid.

In summary, 3 important ways that B12 protects our brain health is by its roles in neurotransmitter production, red blood cell production, and controlling homocysteine levels. Children who have low intake of Vitamin B12-rich foods are at risk for B12 deficiency which may affect their mood, focus and energy. Vegan diets do not contain any foods that are naturally high in B12, so talk to your doctor about B12 supplements if your child follows a vegan diet. Additionally some selective eaters may also have low Vitamin B12 intake due to a narrow list of preferred foods.

Enter your name and email to subscribe to the Blazing Brains newsletter!

Submit your email to be the first to know when registration opens: